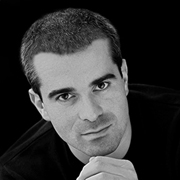 Alberto Nose gained his first recognition at the age of eleven, winning First Prize in the Jugend für Mozart International Competition in Salzburg, thanks to which he held his first concert tour around Italy, Austria and France.

Alberto Nose gives masterclasses at Conservatories, Colleges, Institutes and International Music Festivals, such as the Conservatory in Geneva, the Mannes College of Music in New York, the Bowdo in Festival in Brunswick (Maine - USA) and in Japan.

His discography includes recordings for Assicurazioni Generali, for Tau Records, for the French music magazine Piano, for Radio Classica, Radio Gdansk and Radio Suisse Romande. In 2007 he records a cd for Nascor-Ysaye Records with music of Schumann and Prokofiev, and is awarded the prizes of La Clef ResMusica.com and Coup de coeur Fnac.In 2008 a DVD with Mozart and Beethoven piano music is released by Domovideo, recorded on occasion of the 250th Mozart Anniversary in 2006, and broadcast by SKY Classica Sat Channel. In the same year Naxos publishes a cd with the Six Sonatas op. 17 by Johann Christian Bach, a world premiere on modern piano, that receives the prize "CHOC du Le Monde de la Musique" and "4 Diapason Superbe" and is broadcast all over the world, by Radio France, BBC 3, Radio 4 Netherland, Radio New Zealand, ABC Classic FM USA and Australia.

In 2009, the Rotary Foundation of Rotary International assigns him the title of Paul Harris Fellow (PHF) to career, "as a sign of appreciation and gratitude for his tangible value and meaningful contribution in promoting a better mutual understanding and friendly relations among peoples around the world".

He is regularly invited as jury member in important international piano competitions, like the F. Chopin in Warsaw in 2010.